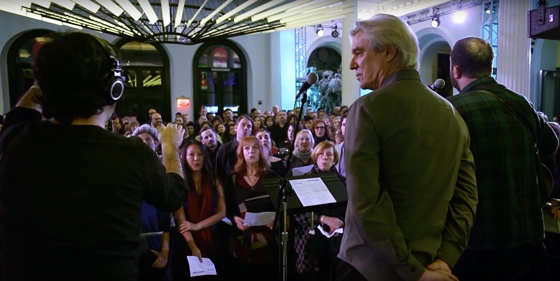 Earlier this month, David Byrne teamed up with Toronto’s Choir! Choir! Choir! to perform at New York’s Under the Radar Festival. Now, an ficial video has been released Byrne and the choral group singing a classic from the catalogue David Bowie.

Byrne and Choir! Choir! Choir! came together to perform “Heroes” in the lobby the city’s Public Theater, and you can take in the performance in the player below.

“There is a transcendent feeling in being subsumed and surrendering to a group. This applies to sports, military drills, dancing… and group singing,” Byrne explained in a statement. “One becomes a part something larger than oneself, and something in our makeup rewards us when that happens. We cling to our individuality, but we experience true ecstasy when we give it up. So, the reward experience is part the show.”

Byrne recently announced a new LP titled American Utopia, along with plans to take it on a world tour. The album will arrive on March 9 through Todomundo/Nonesuch.