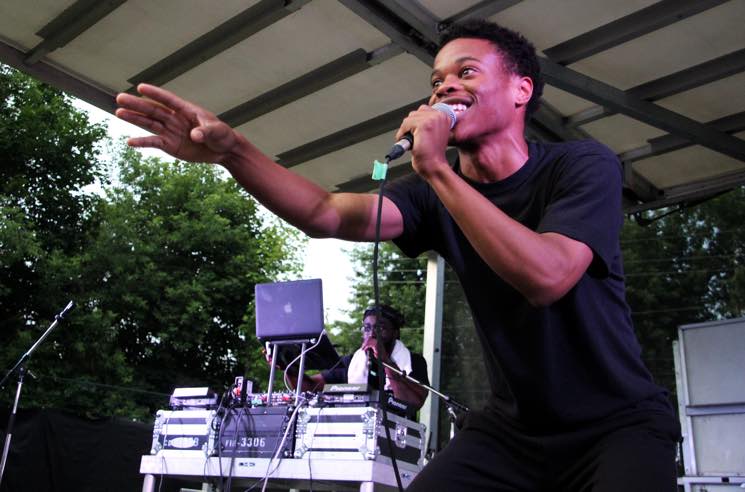 Mississauga rapper John River has taken to Twitter to reveal his battle with a debilitating yet undiagnosed illness, and he is calling on the public to help him find necessary medical treatment.

“On December 9th, 2017 I walked into a local Hospital in Mississauga with chest pain I had been experiencing for around a year,” River began. “It had gotten worse in the month November and after passing out on the 9th December my Mom called an ambulance.”

He continued, “By time the paramedics arrived I was breathing normally again, just a little out breath and fully conscious. I had been having these bouts for around a year prior, and I knew they came & went pretty quickly. They took me to the hospital and ran some tests.”

After doctors sent him home following X-rays, River returned the next day with more chest pain. Medication failed to allete his breathing problems, though a doctor gave him clearance to head home.

A further visit for increased shortness breath and impaired vision led to doctors sending River to psychiatric ward, where a crisis worker tells a doctor he’s suffering from an anxiety disorder.

As his symptoms worsened over the next few weeks, River and his family found a doctor that agreed to test him for a cerebrospinal fluid leak through inserting a needle near the base his spinal cord. Shortly after the test was conducted, he developed an intense sensitivity to light.

“The moment we leave my apartment I start screaming — the lights on the wall are huge — they look like suns. I have no idea what’s going on. By the time we get to the hospital, the pressure in my head feels like it’s going to explode, and I pass out,” he tweeted. “I’ve fallen through the cracks our health care system. My family and friends have done everything they can, but they can’t do any more.”

Taking control the Twitter account on January 19, River’s father discouraged cash donations or GoFundMe campaigns in favour guidance towards a doctor who can deliver a proper diagnosis.

Later that day, an update revealed River had tested negative for Lyme disease, meningitis and heart disease, with a CT scan showing his brain to be normal. Blood tests and an MRI his spine also came back normal.

In another tweet, River said he doesn’t feel it’s a single illness, writing, “I think doctors are looking for an equation but it feels more like a grocery list. I understand mental instability & psychosis are the umbrellas that cover all my symptoms, but I feel at least 2 separate things are happening with my body.”

Read through the rapper’s tweets below. You can reach his family at email protected]