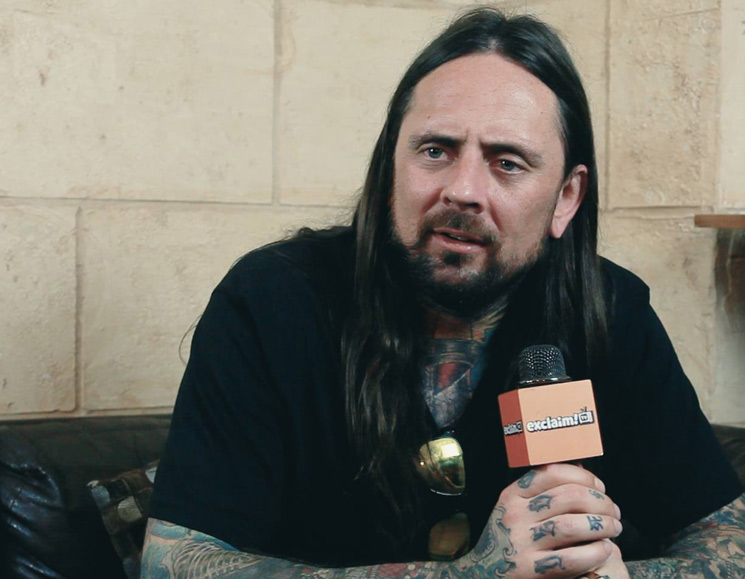 CJ McMahon stepped down from his position as Thy Art Is Murder’s vocalist in December 2015, citing financial difficulty and emotional strain from lengthy touring cycles. He closed down his Evil Soul clothing line and sold one his legendary the North Face windbreakers — a crucial piece his onstage attire. For a moment, it looked as if McMahon was gone from the music world without a trace.

“I would never sell the original] windbreaker at all. It started that image for me. It’s very important,” says McMahon in an interview with Exclaim! TV’s Aggressive Tendencies. “I’m going to get it framed in a big thing and just put it in storage until we get a bigger house, then we’re going to put it in the man cave.”

The truth is that McMahon sold the windbreaker to fset some health-related expenses. His wisdom teeth were impacted and infected, and fixing them was going to cost him over $5,000.

The band continued to tour with temporary vocalists, but McMahon rejoined Thy Art is Murder for 2017’s Dear Desolation. While critics and fans alike took positively to his return to the mic, he insists that he didn’t want the reformed lineup to overshadow their new material.

“We do everything together as a band. I didn’t want any spotlight on me. I just wanted to be back with my boys and move forward together,” says McMahon.

Upon the announcement his homecoming, Thy Art Is Murder released “No Absolution,” a song that was initially left f their prior record Holy War. McMahon describes it as “a stressful time.”

“I was freaking out,” explains McMahon. “I hadn’t used my voice for so long and I wasn’t sure if it was going to come out great but luckily enough it came out pretty good, I think.”

The frontman credits Behemoth, Gojira and Meshuggah as current influences for the group’s material, but if there’s one thing fans should know; it’s that McMahon hates when Thy Art Is Murder is lumped in with the “cliché hashtag” deathcore music.

“We all listen to so many different styles music,” says McMahon. “That’s what makes us unique; that we’re so in touch with music as a whole.

“We’re just writing music that we want to play and hear. If people aren’t going to give us a chance because they’ve heard someone call us a deathcore band, I really don’t give a fuck. It is mind blowing that people will put shit on you without listening to your band just because a genre’s name. It’s just a strange thing, man. I really don’t get it.”