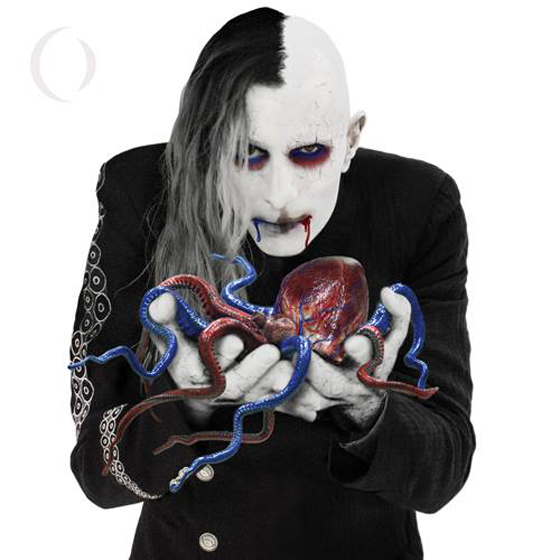 A pair singles and many cellphone bans later, A Perfect Circle have now lifted the curtain on the full set details behind their first album in 14 years.

Titled Eat the Elephant, the 12-track album will arrive April 20 through BMG. It was co-produced by Dave Sardy (Slayer, Incubus, ZZ Top), and you can find its creepy album art above.

Previously released singles "Disillusioned" and "The Doomed" appear in the tracklist alongside "Hourglass" and "Feathers," which were revealed through fan-shot live footage uploaded online.

"Although I'm extremely excited to finally be completing this album after a 14-year hiatus, I'm actually more excited that its intentional release date is serving a greater purpose," vocalist Maynard James Keenan fered in a statement. "The 20th April is frequent collaborator Carina Round's] birthday. She is a dear friend who is extremely difficult to shop for. Pressure f."

He humorously continued: "Of course, I must also note that the potheads are gonna be thrilled that this album comes out on 4-20. May it serve as a glorious soundtrack to accompany all the giggling and vexing sounds nibbling and snacking. Fingers crossed, Cheech & Chong will be proud."

Guitarist Billy Howerdel added, "Demos are these precious ideas that you love in their initial state. Then you collaborate, invite other ideas, and watch them progress. That's the dynamics and growth a great record. I feel we've made a great record."

Eat the Elephant is available for pre-order here in digital, CD, vinyl and box set formats. Find a complete tracklisting and new track "TalkTalk" below.

A Perfect Circle have a series spring tour dates coming up, and you can see their schedule here. They do not, however, have any dates lined up for Canada.